It has been more than 13 years since the first tweet was ever tweeted by Jack Dorsey (one of the founders and today’s CEO).

Since then, Twitter has been constantly growing into one of the most influential and used platforms in today’s world. (Follow me @riojaalejandro!)

From its beginnings till now, Twitter has given a voice to many people and according to the CEO that was the purpose of it.

Making everybody on the same level in terms of sharing their opinions. In some ways, Twitter connected people through content that is much more relevant than on other platforms.

Celebrities, businesses, politicians, spokespeople—everybody gets closer to the people while interacting with their ideas and beliefs through the platform.

We all remember Ellen DeGeneres Oscar selfie that is still considered to be the most famous selfie in the world.

However, I’m sure you know as well that Twitter is extremely amusing when it comes to memes, famous controversies, companies marketing efforts, etc. We are still trying to figure out what the President of America wanted to say with #Covfefe.

One of the most retweeted posts was tweeted in 2017 and it was just a random guy called Carter Wilkerson (@carterjwm) tagged Wendy’s into a tweet asking how many retweets he needs to collect for a year of free chicken nuggets.

Little did he know that Wendy’s will reply giving him an exact number of 18 million retweets. To this day, the tweet has been retweeted 3.4 million times! Amazing, right?

That is the gist of Twitter, everybody can be relevant in some way, and you can get there in a pretty funny way! Carter now has more than 95K followers and is known as the Chicken nugget guy.

It is so influential that in 2012 and 2015 Twitter won the Crunchie award for Biggest Social Impact by Techcrunch. (learn how to get featured on big publications)

So, Twitter is a social media platform that has an enormous reach, potential to go viral, expand your business, and extremely high social impact which is why it is continuously growing.

But it is free, and there are no major ads on Twitter, so how does it earn its money?

Post Contents show
1) Beginnings of Twitter
2) 1. Promoted Tweets
2.1) How do they work?
3) 2. Promoting Accounts and hashtags
4) 3. Data licensing and other sources
4.1) How does it work?
5) Current revenue numbers for Twitter
6) Predictions for the future

Twitter was built more than a decade ago using a web-app framework called Ruby on Rails that uses the programming language Ruby.

It was designed by Biz Store and Evan Williams who previously worked at Google.

They had a podcasting venture called Odeo, and Evan Williams previously had the blogging tool Blogger.

Twitter started when Evan tried to experiment with an SMS or a short message service that was initially called Twttr.

When he saw that his experiments may have a huge potential for the future, he got Jack Dorsey on his team and they created the final version of Twitter.

After it was online, the platform received plenty of venture capital investments.

From its beginnings, Twitter was a free platform and even after it got quite famous it was still lacking a way of turning its popularity into revenue.

No membership fees, no banner ads, no revenue at all.

A few years into, Twitter became so relevant that it was obvious to the team that they had to figure out a way to monetize on this platform.

All this time, Twitter was operating from the venture capital investments that it was receiving.

Then, in 2010 Twitter found a way to include advertisements in their feed known as “Promoted Tweets” which became of the main sources of revenue for the company.

Promoted Tweets are normal tweets that are used as ads for entities that want to reach a specific audience or a wider one.

They can also be used to inspire engagement from the already existing followers and not necessarily target new ones.

These types of tweets are letting you know that they are promoted and that is the only difference between then and usual tweets. You can engage with them in the same way you would any other tweet.

Promoted tweets can be seen on multiple places in your Twitter feed:

How do they work?

Twitter is treading carefully with the usage of Promoted Tweets. They are displayed only once and when you continue to scroll down the Promoted Tweets go up the feed just like any other tweet.

If you don’t want to see them, there is an option to hide it and stop future promoted tweets of that type to be shown to you.

The way that they work is an advertiser pays for the placement of these Promoted Tweets and they are shown to people. Simple as that. Basically, any person can start a Twitter Ads campaign and choose a specific goal according to what they are trying to achieve.

There are strict rules and policies about these promoted tweets campaigns and not everybody can use them.

Twitter tries hard to be a safe place for everybody, so a lot of topics are forbidden, and a lot of them are restricted.

For example, the CEO recently replied to all the people asking about the “edit” button, that they will likely never do it.

The reason behind this is that somebody might retweet something, and afterward, the person can change the content of the tweet entirely making all the people that retweeted having something on their profiles that they do not agree with.

They are for sure threading very carefully with how this huge platform is being used.

On the exact same principle, you can promote entire accounts and hashtags instead of simple tweets.

The procedure is almost the same, and it works in the same way as the promoted tweets. Hashtags are of great importance when it comes to SEO tricks.

Let’s talk numbers for a while to explain how much money exactly Twitter earns from these promotional activities.

The majority of Twitter’s revenue comes from advertising as I previously mentioned.

In percentage, more than 85% of their revenue is from ads. And that is a huge number.

Written down in specific sums, in 2018 Twitter claimed revenue from advertising of staggering 2.61 billion dollars which was then a 24% increase from the previous year.

And this got even better for the company in 2019, since as Twitter reported they got 679 million dollars only in the first quarter of the year. This meant, an 18% increase from the previous year.

3. Data licensing and other sources

Other than their biggest revenues from advertising, the other 14% comes from data licensing and other sources.

In 2018, this revenue was 425 million dollars which was a 27% increase from the previous year.

For 2019, Twitter stated that they made 107 million dollars only in the first quarter which is a 20% increase from the previous year.

How does it work?

First of all, if you don’t know what Data licensing means it is basically Twitter selling subscriptions to public data to entities that want to “access, search and analyze historical and real-time data” on Twitter.

Basically, they are selling the data that they have access to and this is done in two levels premium and enterprise. I guess it’s true what they say that data is the new oil.

They are selling a firehose of more than 500 million tweets on a daily basis to multiple companies. These companies that get the data usually use it for analysis on what’s trendy, predictions in trends, relevant news, and even in some cases for trading purposes.

The purpose of selling this data to companies so they can turn it into some kind of actionable data, and that is why they are willing to pay a lot of money for it. That is the reason why this type of revenue has been increasing over time. 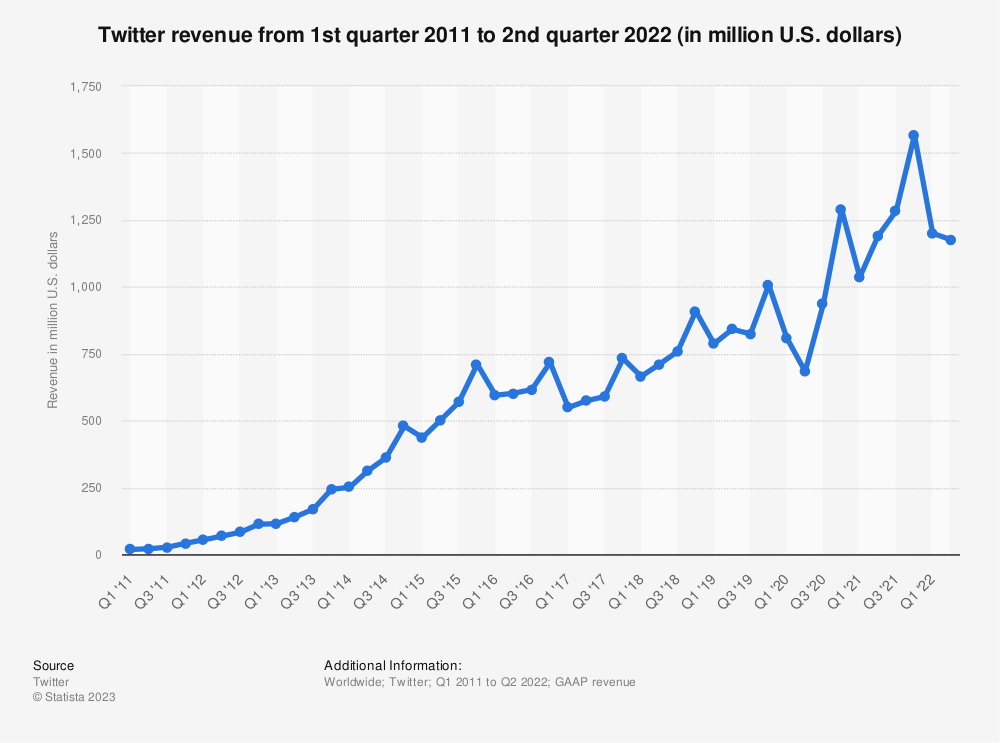 Predictions for the future

Apparently, after Twitter did not improve a lot in regards to their platform in the past periods, certain investors are backing out.

Manager Josh Brown sold his shares of the microblogging platform after questioning the ability of Twitter to bring the platform to the next level.

This happened after the CEO of Twitter revealed that his plan is to live in Africa for six months every year.

Looked from another perspective, the people backing down from the shares of the company are making some space for new opportunities for the people interested in taking a piece of the cake.

Following the past years’ success that Twitter is having, 2020 is looking like it’s not going to be any different.

In fact, the Bank of America is expecting to see a 15% increase in the revenue from digital advertising in 2020 and gives a sum of 342 billion dollars that will be spent on it throughout the year.

The simple fact is Twitter’s user base is growing more and more, which means that Twitter is still becoming more relevant.

The biggest problem is the negative profits since it makes the whole business model of the company not profitable. The model needs to be upgraded and changed—some changes are maybe coming this year.

Liked this post? Read how other tech giants make money:

Drop a comment below telling me which company you want me to cover next!